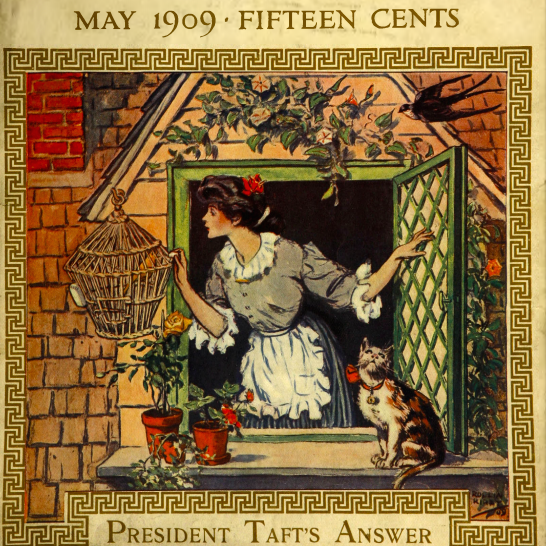 McClure’s Magazine is a defunct literary magazine that ran from 1893 to 1929.  It was very highly regarded and influential during its time, commonly known for “launching the ‘muckraking’ era in American journalism” (The Modernist Journal Project).  Muckraking, an act of publishing pieces that speak out against social and political injustices, began with Lincoln Steffens in McClure’s.  His article, “Tweed Days in St. Louis,” “exposed how city officials worked in league with big business to maintain power while corrupting the public treasury” (US History).  This new kind of investigative journalism sparked people’s interest in McClure’s, allowing it to flourish during the 19th and early 20th centuries.

I chose a volume at random to look through, and was surprised to see that William Howard Taft, the 27th President of the United States, was published in volume 33, no. 1.  He had not yet been inaugurated when the piece was written, but it was nevertheless a clever way to draw people’s attention to the magazine upon its release in May of 1909.  The cover’s bright colors and cheery illustration also contribute to its appeal, because it definitely made me more interested in its contents.  The artwork on the front is of a beautiful woman with a rose in her hair, caring for a bird in a cage outside of her window.  There’s an abundance of flowers and plants framing her, and a cat sitting on the sill watching a bird fly by.  This simple yet serene scene is entrancing, yet it is worth noting that there is not much of an association between the cover and the rest of the magazine.  With pieces like “Tammany’s Control of New York by Professional Criminals” and “What We Know About Cancer,” how is one to see a connection between what is initially seen on the front versus what we read on the inside?

A good portion of the magazine is advertisements, everything from chocolate to pianos to Tiffany & Co. jewelry.  I’m assuming literary magazines were more mainstream in 1909 than they are now, so advertisers would pay a lot more to gain a spot.  I don’t necessarily mind the abundance of advertisements though, because it allows us a glimpse into what the world was like at the time of this issue’s publication.  $2,250 for a new car?  $9.50 for a revolver?  $15 for a typewriter?  What a world it must have been.

All the pieces are incredibly long-winded and hard to read.  There are dozens of pages with nothing but text; however, some works are broken up with penciled illustrations or black and white photographs of old white men posing with their walking canes and encyclopedias.  Although I couldn’t imagine reading any of these pieces for fun (ever), it’s fascinating to think of the influence McClure’s had on the social climate of its time.  There is power in the ability to write freely about one’s concerns, especially when it comes to things that can’t be overcome without large numbers of people.

McClure’s magazine is an excellent example of a literary magazine that fulfilled its purpose and then expired when the time came.  It allowed readers to broaden their perspectives and learn to never blindly trust someone just because they are in position of power.  This magazine set the standard for many literary magazines to follow, and truly invented a new era of investigative journalism that gave political and social critics a platform to speak their truths.