The Alaska Quarterly Review: A Journal Worthy of its Standing 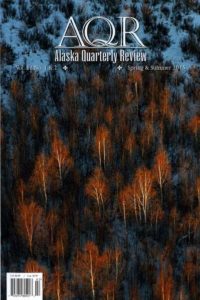 Just on the edge of some gold-tinged cluster of birches, the title appears in condensed, white font: The Alaska Quarterly Review. This edition, Volume 32, Issue No. 1 and 2, features a cover that seems relevant to the journal’s name: bare trees, packed snow, thickets of shrubs, barrenness. This is what I think of, perhaps stereotypically, when I think of Alaska. However, when I opened this edition at a random page, I was met with the denim-blue eyes of a young Palestinian girl. Her hands are cupped in front of her as if she’s holding a secret she doesn’t want me to see. The caption of the photo reads: “A Palestinian girl recites verses from the Qura’an at a mosque in Gaza City. 2009.”

It is part of a special feature, “Gaza: The Land Behind the Fence,” by Palestinian photojournalist Eman Mohammed. What follows are images of airstrikes, rubble, masked militants, children huddled in refugee camps, fearful mothers and fathers, the Palestinian Flag held high. These heart-wrenching photographs are from the 2008-09 war between Israel and Palestine in the Gaza Strip. This struck me, not only because I had falsely assumed that The Alaska Quarterly Review would focus on content surrounding Alaska, but because of the intense emotion and feeling in these pictures of scared children and dead children and mourning widows. The photo essay tugged at me before I even read a word.

As I flipped through the pages, my thumb landed on a poem about a river, a short piece that I found myself reading multiple times. It was called “River in August” by Candace Black. Maybe it was the language, the satisfying, repetitive “el” sound that made me feel as if I was rolling my tongue as I read. Maybe it was the intense, descriptive imagery about a river and its changes throughout the seasons that dropped my core temperature and reheated it again. Maybe it was the structure, the short, choppy sentences that still seemed to flow and melt together like warm river currents. I think it was a combination of all three characteristics of this short poem that made it one of my favorites in this edition.

While I prefer more color in a literary journal (something to differentiate it from a standard novel or textbook), I enjoyed this edition of The Alaska Quarterly Review. The pieces were accessible; nothing distracted away from them. Your attention was all theirs. I would like to continue working my way through Volume 32 of The Alaska Quarterly Review; I can already say, from Mohammed’s captivating photo journal and Black’s sensory poem, that it is a journal worthy of its standing.