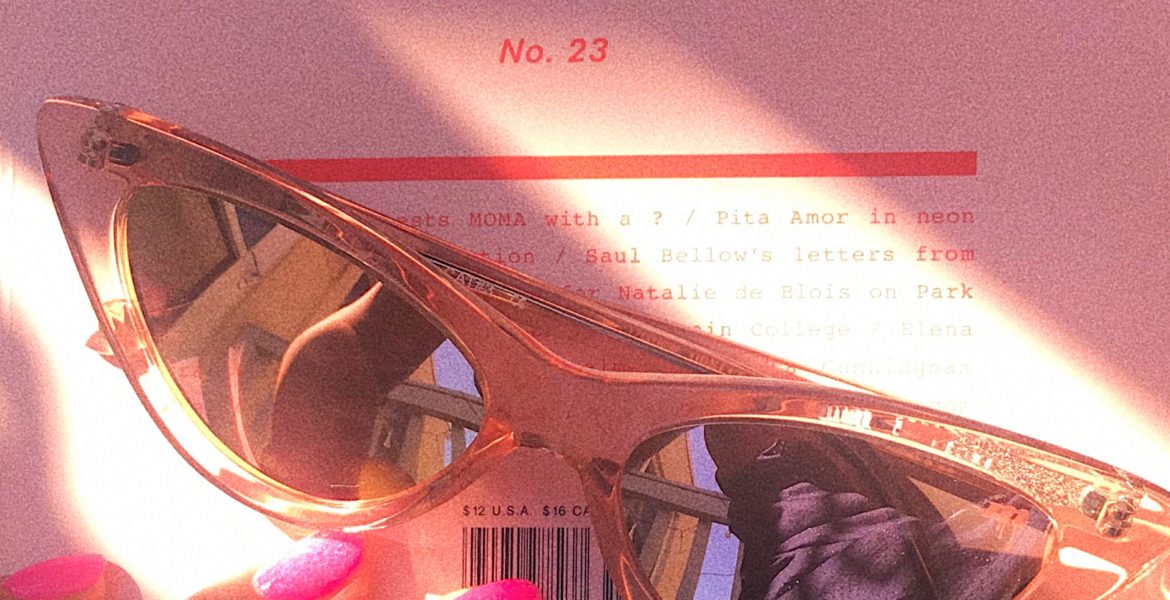 A Public Space: A Small Museum You Could Hold in your Hands

I find it embarrassingly important to note that I have not had a lot of lit mag experience—and by a lot, I mean zero. But for only twelve dollars, an era of ignorance met its end. The twenty-third issue of A Public Space marked my first dive into the dating pool of literary magazines.

The salmon pink and reddish orange issue matched my brand new cat-eye sunglasses and manicure perfectly. I took it as a sign that it was meant to find my palms. I flipped through the soft off-white pages full of literature and art.

The publication has a refined, minimalistic, “MOMA” feel—like a small museum you could hold in your hands, curated by intellectuals who I imagine wear primarily black fabrics that sway when they do. What a fashionable discovery.

It’s always nice when your first has the maturity to keep it classy.

Not one shallow enough to fall in love based on looks alone, I browsed the table of contents, searching for an appropriate location where we could sit quietly together, and I could observe the personality behind the sophistication—page ten, Kathleen Collins’s “Husband.” My first official date.

“…It’s a long improvisation, my life…I don’t know many musicians who could come up with the variations I have… like a poet with a third eye for the way the wind blows… I put my token in the great subway train and went for a ride. I’m a moody son of a bitch.”

In the five pages of the story, only about seven sentences ended with periods. The rest, a continuous stream of thought, was broken up by ellipses. The piece was gruff, whimsical, didn’t follow the rules, and left me confused at the end—but in the good way where you want more because of the mystery of it all. Precisely how I’d categorize a perfect first date.

Later that night, through Elisabetta Rasy’s short story “The Truck,” I rode in a truck with a “distinguished yet impoverished man.” He was on the way to pursue an old flame, motivated by a pleasantly unexpected letter expressing that she still thought about him even after so much time had passed between the two. We hitched a ride from a “young guy with a pleasant face.” Sparse, awkward conversation filled the silences as we jerked through desolate highways late in the night. The man suggested music from his own tapes that he had brought. The driver declined and insisted on cassettes of his own that he would rather play. I sat in the rattling truck blindly, having little idea of exactly where we would end up at the ride’s end.  After a sketchy stop at a gas station, uncomfortable conversation quickly escalated to a high-speed chase. Our truck tailed a white mini driven by a young woman (someone the driver spotted leaving the small store attached to the service station). I wasn’t sure why. It all happened so quickly and menacingly in the dark.  Our vehicle crashed against a guardrail. We dodged glass and fire and the unlucky fate given to the now lifeless truck driver. The woman driving the white mini pulled us from the wreck and escorted us to her vehicle, noting, “there is nothing that can be done here, and you certainly are not a reliable witness.” I ended the night still as a passenger but in a new vehicle, leaving behind the scene of total devastation, hurtling into the darkness with a new driver and utter confusion and angst—a startling experience for a brand new relationship, and so early on in its stages.

I will certainly see A Public Space again.

I must like my magazines like I prefer my men: sort of intimidating, smart in the mind and dress, daring, rebellious, unafraid to take me on random and somewhat terrifying adventures, and always, always, with a good story to tell. I’ll be theirs for life (in an open relationship, of course).